And like every school day, I heard them this morning when I dropped my son off at school. As he was getting out of the car, I told him I loved him. And his reply was, as always, “I love you, too.” I thought it was especially a good sign because he was about nine-tenths out of the safety of the car. It was possible, you know, that some of his friends might have heard him. 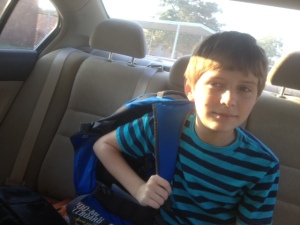 Dropping off my son at school, as he gets set to head to the playground for some early recess time.

So we’re still in good shape in this area. But he’s nine now, almost ten. I wonder how much longer I can expect this response. I hope a long time, but I know it might end, and sooner rather than later.

It’s been kind of a ritual for us – taking my kids to school. My daughter rode the school bus for the first couple of years, and for some reason I started taking her during her third grade year. That continued just about until she graduated from high school.  Now it’s my son’s turn.

Driving to school in the mornings is usually a good time for conversation. I’m not sure why. Maybe kids aren’t fully awake at that time and aren’t aware they’re divulging any secrets yet. Or maybe they just feel like talking, too.

Sometimes the topics are serious. Sometimes pure nonsense, just joking around with the kids. And, of course, there are those mornings where we don’t say much of anything.

But no matter what, every day when we get to the school, there’s an “I love you.” I think that’s a common thing for all parents. We want our kids to know how we feel before we let them out – that no matter what the day may bring their way, there is one thing that they can count on in their lives, and that’s the love of their parents.

And I guess there’s always that part of me, too, that thinks (but hopes it’s not) that something tragic could happen. After all, who knows what the day will bring, who knows what might happen to any of us. And I want to make sure that if they didn’t know anything else about me, that they at least knew how I felt about them.

I’m sure the day is coming (and probably soon) where my son is too embarrassed or too “grown up” to respond. But I’ll always end our car rides with my “I love you.”