I knew it had to happen. It was only a matter of time. The only question was, when . . .

You know how it is. You’ll be going along in life, everything seems to be smooth and calm. And there you are, just rocking along, when . . . WHAM! It hits you.

And that’s pretty much what happened to me.

I was driving down the road, minding my own business. I pulled into a McDonald’s to use the bathroom and get a drink. And then . . WHAM!

I found myself ordering a Filet-O-Fish sandwich. 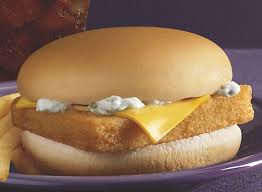 Yeah, I know. You’re wondering . . .was I sick? Perhaps drunk? Taking strong meds? Or perhaps I was coerced by a band of wayward pirates who had somehow taken a wrong turn, floated up some small tributary, and had stumbled into a McDonald’s tucked cozily away in a Valero station.

Yes, I did HAVE to eat it. But not for any of those reasons.

First, I just like saying the name. It just kinda, sorta rolls off your tongue without really rolling off at all. Try it for yourself . . .

But it goes much deeper than that. You see, I pretty much eat three Filet-O-Fish sandwiches from McDonald’s every year. And that’s a pattern that’s pretty much been in place for as long as I can remember. (Or at least as long as I’m willing to admit to. Whichever came first).

But it’s not just those semi-delicious sandwiches from the Golden Arches that I have quotas on, there are other things, too.

For instance, anytime I go out to eat, I ALWAYS have to get at least two refills. Now that only counts for a sit-down place.

I eat at KFC at least twice a year, usually against my better judgment. But what can I do? There’s a quota in place.

Ha! Just kidding. On the second part, anyway. On the first half, I just can’t quite help myself. So in this category I guess I should say, I talk to at least one person on each trip that I don’t know whether THEY want me to or not.

I have to hit the sign at the entrance to the track every time I enter to run there. And two more times on the way out.

I eat at least 52 cheeseburgers a year.

I don’t actually count ice cubes, but I do cram as much ice in every drink that I have (non-dairy, of course). I mean, the ice is free, so why not spoil myself with it?

I also number my running socks so that I can rotate them on a regular basis.

My son thinks this is weird, but what does he know? I mean, how can I respect the opinion of someone who won’t eat at least bags of pork rinds a year?

← My son enlightens older sister on THE J WORD
That egg roll was some kind of awful! →