There’s something you should know. My kids are smarter than me. It’s a tough reality to wake up and face. But I have to face it every day.

My college-age daughter sits around answering almost every question on Jeopardy (Now named to the cabinet, Steven Chu won a Nobel for capturing atoms with these light beams? – ummmm, what?) and my 9-year old son is telling me about the various weather fronts around the world. (Those are mammatus clouds, dad – duh!!)

And me? What’s my contribution to the world’s knowledge? Well, lately I’ve been spending a lot of time contemplating the return date of Ding Dongs.

I’ll never forget the morning my daughter received her first ACT scores. She was a sophomore, and she basically doubled my score on her first attempt. At a younger age. Without studying.

I never got on to her about studying again. Well, actually, I was kind of scared she might start using words that I didn’t understand. 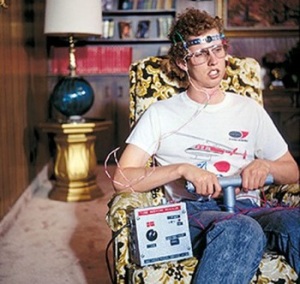 So what happened the other day shouldn’t have really come as a surprise. My son and I were talking about something, and I happened to mention that what we really needed was a time machine.

I was expecting a laugh. Or maybe a sarcastic comment.

Instead, I get this, “Dad, time travel isn’t possible yet because we don’t have the right power to run one.”

As you might expect, I was a bit curious. What do you mean, I asked.

“There’s not enough power in the world for us to have a time machine now. Maybe someday when we discover a new power source.”

Ummmmmm. What do you say to that. My thinking is that I really need to monitor his activity a little more closely when he’s in his room alone.

One thing for sure, if he asks me for any Krypton, I’m taking away that nuclear reactor I got him for his birthday!

← Hawaii delayed for rummage through the trash
Death by Weather Channel →

4 comments for “My son – aspiring mind or mad scientist?”