In my early days out of college, one of my first jobs was writing sports at a newspaper in the small town of Nashville, Arkansas. That wasn’t anything completely new to me because I had spent most of my falls in college doing radio play-by-play for a local high school.

I’ve moved on to other jobs since, but I’ve been able to stay somewhat active covering high school sports in the area. For years, I worked at the same Nashville newspaper I started at. In recent years, I’ve started covering the team for the radio station. 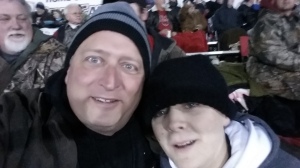 My son and I have found that the best way to spend an off night from football is with MORE football.

One thing that I’ve always found fascinating is how different coaches are. And not just their take on all things football. But their personalities, too.

One coach was like a CEO. One was aloof while focusing on new offensive formations.

And one presented himself as very country – just your friendly, down-home boy. But he was probably the most savvy when it came to dealing with the local media.

And he always had a unique way with words and phases. For example, about every three weeks, we would be starting a new “half” of the season. I figured it up one time, and according to him, there were about six halves of every football season.

When I asked him what he was going to do in preparation for a game with an upcoming opponent, his reply was “We’re going to play our game.”

I found a good life lesson in that – always do what you do best.

He sometimes phrased that line just a little differently – “We’re going to dance with what brung us.” I think some other coaches over the years (before and since) and used that same line, but I still like it.

Obviously, I’m still having fun. But a couple of years ago it became even funner.

When my son was little, he would often stay with my mom on game nights.

But about two years ago, I thought he might enjoy going, so I invited both of them to go with me. And a tradition was born.

He and my mom went to almost every game with me last year . . . although both were conspicuously absent for my five-hour trip to a playoff venue. Hmmmmmmm.

But this year, my son has gone with me to EVERY game. And we’ve had a blast.

He thinks it’s BIG TIME to sit in the press box. I don’t have the heart to tell him otherwise. But I guess when you’re 11, it does seem pretty cool.

The high school playoffs started last week in Arkansas, and Nashville ended up with a bye in the first round.

We’d been going to games now on Friday nights for two and a half straight months. And here we are in the first week of the playoffs with no game to go to. It’s hard to quit suddenly like that. So what did we do?

We went to just watch a game.

We decided to go watch a game in the same town where the grandparents live. Temperatures that night were down in the 20s, but we dressed warm, took some blankets, and bought some hot chocolate.

AND we had a great time.

And it’s one of those events that you love as a parent – it really wasn’t that big a deal, but it WAS a big deal.

It was another bonding experience, something that we did together that we can look back on someday and say, “Hey, remember when we went to watch that playoff football game when it was freezing?

No, it wasn’t the biggest event ever had together. But it’s what’s brung us this far together.

And I’ll be looking forward to this same dance in the years to come.