I don’t normally promote my birthday. In fact, I usually try to ignore because ignoring it = not getting older.

But this time I’m straying from the normal course. Because this time it’s a Big Un. It’s the BIG Five-Oh. I won’t have another birthday this big for another 50 years, so I need to make this one count.

In fact, this birthday is SO big, that they’ve given everyone the day off. Of course, it’s also on Saturday so that might have had a little bit to do with it . . .

First of all, for the Sheryl Crow update. If you’re a regular reader, you know that for some time now, I’ve been hoping to connect with the popular and ultra talented singer/songwriter and go out with her on my birthday, but so far she’s playing hard to get.

However, while I haven’t heard from her, I did receive a rather nasty letter from her lawyer. Sure, I understand how 137 letters to Sheryl expressing my love and marriage proposals might look a little excessive to those on the outside. But I learned all my courtin’ techniques from some highly popular romantic comedies. It’s hard to argue with countless hours of quality entertainment of Lifetime television.

So at this point, I feel like as a MORE MATURE ADULT, I should be dispensing words of wisdom to today’s young whippershanppers. 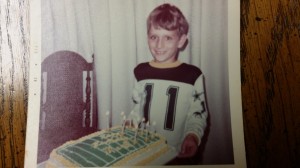 Well, first of all, when I was young, we used to travel around in these contraptions called . . . CARS!

Ok, so maybe things haven’t changed too much since I was a kid. I guess the thing that I’ve been most amazed at is technology, specifically telephones. I’ve gone from a rotary dial to a phone that I carry around that’s more powerful than the computer I used in high school (AND college), my family’s television, any five sets of encyclopedias I might have used to write reports on Mars, AND the Apollo 11- COMBINED!

So what am I going to do to celebrate my 50th?

No real idea. I thought I might throw a party and invite every girlfriend I’ve ever had and have them all together in one room. But then I realized that would be a lot like getting a glimpse into hell. Well, hell for me or them one – I’m not really sure who comes out worse in that deal.

So what have I learned in 50 years on earth? Well, I have a few short slogans I live by.

First: You never know. Yep, I’m never surprised by anything that happens in life any more.

Second: “I would have gotten away with it if it hadn’t been for those meddling kids.”

Ok, maybe I didn’t learn much from Scooby Doo, but it’s nice to have a line handy for when I want to blame someone else – especially my kids!

And while I’ve been joking quite a bit, I do want to say that I appreciate all my family and friends who have been a part of my life. Sure, my life hasn’t always been easy. Anyone who makes it to my age is sure to have suffered some bumps and bruises along the way. But I wouldn’t trade my life for anyone else’s.

Here I am this fall doing two things I love – spending time with my son and broadcasting high school football.

Great kids. Great parents. Great family. Great friends. Some good barbecue and chocolate thrown in from time to time. It’s just like they told George Bailey – it really has been a wonderful life.

And finally, I’ve found that you can learn a lot from watching the Christmas classic Santa Claus is Coming to Town. Basically, toys are fun, there’s more to life than just doing chores and cleaning your socks, and last but not least, laugh often. And laugh hard.

The Burgermeister is all about clean socks . . . and squashing all fun.