As I’ve gotten older, I’ve noticed one indisputable fact – I can’t eat the way I did when I was younger. And by younger, I mean like a few weeks ago.

That’s not exactly true, of course. I have tried to eat a little better. Not as hard as I’ve needed to, but I’ve tried.

And I’ve always tried to run and workout some. But that leads me to the other hard truth I’ve had to face – I’m not in the shape I used to be in when I was young. And that’s saying something because that bar was pretty low to start with.

And now when I try to exercise, my body doesn’t want to necessarily cooperate. Sometimes it calls in sleepy, especially on these cold mornings. But usually my body responds with injuries, which is your body’s way of saying “Hey buddy! Whadda ya think you’re doing! Don’t ya know you’re getting old!!” 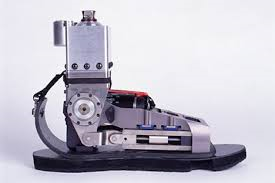 The latest of my assortment of injuries has been plantar fasciitis?

Not sure what that is? Don’t feel bad; I didn’t either.

Put simply, it’s just a pain in your foot.

But I try not to get caught up in all that medical mumbo-jumbo.

So the other day, while I was limping through the house like an actor doing a bad Frankenstein impersonation, my son had a very reasonable, sensible suggestion.

“Dad, why don’t you just get a mechanical foot?”

Hmmmmmmmm. I admit it seemed a bit ridiculous at first, but then . . .

I mean, why not? Sure, it wouldn’t be easy cutting off my own foot, but once I inserted the Mechanical Foot . . . well, that would just be the beginning.

And then it hit me! The foot could be only the FIRST part I replaced!!

I mean, let’s face it, I have a lot more pressing problems with my body than just a foot. Why stop there.

I could finally become, as I so often dreamed when I was a kid, THE SIX MILLION DOLLAR MAN!

And imagine how well I could do with my running. I can see myself competing well at my next 5K. Of course, admittedly, most of what Steve Austin did was shown in slow motion. But even slow motion is still an improvement over my usual pace.

So with the new year starting and resolutions flying all around, I think I’ve found the goal that best fits me: incorporating Bionic Man Technology stuff in my life.

Besides, this isn’t really a new goal in my life anyway. Instead, this is me realizing a childhood dream.

Now, on this Bionic Technology stuff? Do I use Tinker Toys or an Erector Set . . .

← Exposing the Cold Gap
“You beat cancer by how you live” →