So here we were today, getting home a little late after I finished up an interview for a student’s podcast.

Before I go on, there’s something you should know. My son is big about worrying about the environment. He wants to invent a car that runs on a clean energy source, and thinks one that runs on carbon dioxide might be a good idea. 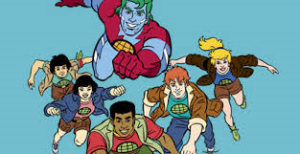 I used to think Captain Planet was pretty lame. But now, in hopes of avoiding being wished into the cornfield by some kind of new mind meld technology my son might invent, I’m going to say that the Captain and his gang are REALLY COOL!

Hey, it works for me.

So today, my son and I arrived home, and my daughter was already there. I was feeling kind of brain tired (in other words, normal for me) when my son threw out this question:

“Do either of you even KNOW it’s Earth Day?”

Well, I knew it was because he’s been talking about it for what feels like the last 12 years, and he’s only 10 years old.

So being my normal smart ass self, I said, “Eh, I’m tired of this planet. I’m ready to get a new planet.”

You know, I really thought I’d reached the point where there was nothing he could say that would surprise me anymore. I mean, I should be used to hearing odd things from members of our household. But I was wrong, when my son (who is also known as the second coming of Lex Luthor) followed my statement with this:

“Dad,” he said in a tone that indicated this was something I should have already known. “We can’t perform terraforming yet.”

I had to stop and laugh for a minute. Then, like any competent dad, I pretended I knew what he was talking about.

I stealthily made my way to the computer so I could look it up. Terraforming: basically the process of trying to modify a planet similar to earth and make it habitable.

Are you kidding me? Where does he come up with this stuff?

So, I don’t mean to scare you or anything, but our generation is about to be followed by my son and like-minded kids. Kids who are up-to-date on what we need to start time travel. And understands what it will take to start terraforming, whatever the hell that might be.

So my advice, on Earth Day 2014, is take care of the planet we’ve got. Because if our kids are smart enough to understand these sophisticated advancements in science, I hate to think of what they might come up with for a simple plan of revenge against their parents.

← Going back in time
My dancing – offensive to some, horrifying to all →