Friday night at our house usually means one thing – pizza and a movie. Or is that two things? (I feel like I’m in the middle Monty Python’s Spanish Inquisition skit.) 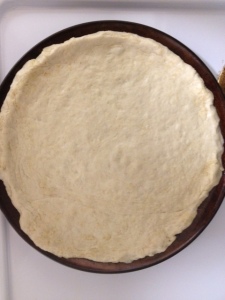 The pizza can come in several forms. Sometimes we order one. Other times we go with the frozen pizza, sometimes even adding our own toppings (“doctoring it up”, is what my grandmother called it). On a side note, I think Totinio’s pizzas are way under rated. I love those things. My favorite is the Canadian Bacon. They probably taste so good because each piece has about 350 grams of fat.

But our favorite thing to do is make our own pizza. We don’t do anything

The first step in making our family pizza is getting the crust ready.

elaborate. Way back in my married days, we had a bread machine and sometimes made our own crust. We called these pizzas the “Cannonball” because it was so filling, you felt like you’d swallowed a cannonball. 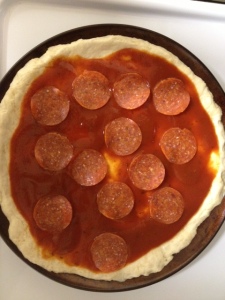 But we’re operate on a much simpler level these days. Now we just buy one of those Chef Boyardee pizza kit, and then start “doctoring” on it.

My son only likes pepperoni pizza. We buy our own rather than use the ones that you can buy with the kits. I think my son could eat a whole package of pepperoni just by itself. If only I could get him to eat fruit the same way. 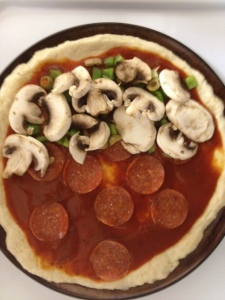 But I like one with about everything. My favorite toppings are green peppers, olives, and mushrooms. You can never have too many mushrooms. Well, I guess you could have too many, but I haven’t reached that level yet. But I’m still trying.

So we pretty much make two distinct halves – one that’s really, really good, and then there’s the one my son likes.

Then we add plenty of mozzarella cheese, probably more than about any two pizzas that you’d buy.

Once the pizza is ready, then we’re set for our movie. We have built up a nice collection of family movies (although, occasionally, my son will venture into one of my bad movies, like “Sharknado”). But this week, it was “Despicable Me 2,” a choice we’ve seen a couple of times, but my son still likes it. 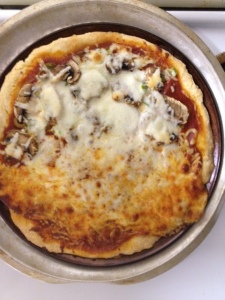 The finished product – ready just in time for the movie.

And the pizza and movie make for a great family movie night.