For years, I’ve been told that I should have been a doctor. This has very little to do with my intellect or compassion or even applying a simple band-aid from time to time.

Nope. This observation comes solely from the fact that I have horrendous handwriting. It’s pretty awful.

I didn’t see blood, so I figured, “how bad could it be . . .” My daughter’s cast supplied the answer.

But that’s honestly the only thing that even remotely makes me resemble a doctor. Because when it comes to doctoring up my own kids, my skills aren’t much better than my handwriting.You know how a lot of parents kind of freak out if their child coughs? Or runs a 105 degree temperature? Or is losing about a pint of blood?

Well, that’s not me. In fact, I’m quite the opposite. Short of dismemberment, I tend to downplay about any illness or injury my kids come home with.

Take for instance the Y2K Injury (Remember Y2K? Wow! Hard to believe that was ever the BIG issue that it was.)

My daughter and one of her friends had gone off to play nearby. A short time later, they returned, with my daughter crying and holding on to her arm. It wasn’t hanging by a strand at the shoulder, and it wasn’t flattened like you might see happen on a cartoon. In fact, there wasn’t even any blood. So how bad could it be, right? 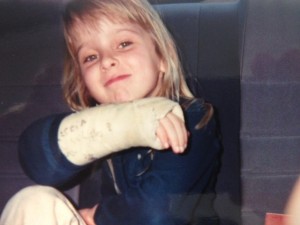 My daughter proudly displays her cast after getting it signed by several of her friends.

Fortunately, my wife knew (and let me know) just how bad it could be. A few hours, a grueling waiting room wait, a series of x-rays, and a trip to another nearby hospital later, we returned home with a cast.

Another time when my daughter became ill when she was in third grade. There was coughing (but not coughing up a lung or other vital organs) some fever and feeling bad. Ok, she’s probably just pretending so she doesn’t have to go to school.

My wife said maybe it was pneumonia. Naaaaaaa! Can’t be that. At worst, it’s a virus, some bug that’s going around.

This is a sample of my “good” handwriting, a trait that has many believing I should have been a doctor. Just don’t ask my kids about that.

A few days and a real doctor’s check-up later, we found out that it was, in fact, pneumonia.

Ok. So I missed on a couple of times on the right diagnosis. After all, what are they going to do, sue me? Sure, I might have the handwriting of a doctor, but I promise I don’t have the bank account of one.