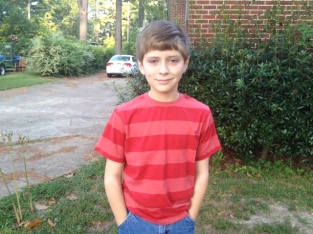 My son, a bit nervous as he begins fourth grade at a new school.

The first day of school. There’s really nothing quite like it. And for the first time in a long time here in Arkansas, the cooler weather this summer actually, today actually felt like the beginning of a school rather than a survival training day in the desert.

For my son, this was his fifth time to have a first day. Each year brings something new, and this year was no different.

My son was starting fourth grade, which meant a new school, new building, and new procedures. “What if I don’t know what to do?” was a popular question on Sunday.

We were able to meet his two teachers (two instead of one – another change this year), which is always a good thing. But there was a slight bump in the road this year – an assignment for the first day.

The assignment was simple: put five things about yourself in a sack (which was provided), then tell about yourself. But my son took the assignment to a new OCD level. There was nervousness and fear. But after picking out the objects he wanted to take (a baseball, a mini soccer ball, a word search book, a small chess set, and a calculator – because he likes math), and letting him practice helped him feel better about the whole thing.

This morning was pretty calm, the only concern was what to do during his “final 30 minutes of summer.” There wasn’t quite time for a beach trip, so we ended up mostly talking, with an episode of Arthur thrown in. The drop off at school was smooth and surprisingly free of chaos.

But it’s also a little sad, because it’s also a last – the last time he’ll start fourth grade, start this new school, have more than one teacher. Another milestone behind us, another step toward growing up.

We survived the first day without too many injuries. By 9 this morning, I knew  the day was going well when no one from the school called me. When it reached noon, and I still hadn’t heard a large convoy of sirens heading in the direction of the school, I knew we would make it through Day 1.

The speech went well, and was much less of an ordeal than the drama and dread leading up to it. Lunch was good, but recess was too short. Old friends were brought together again after the summer break.

And the best part, at the end of the day, I got to be there to pick him up and hear all about it – something I don’t get to do every day. Turns out he doesn’t have any homework on his first night. He was happy about that.

Well, I guess that even with each new school year, some things will never change.

2 comments for “The fifth First”