Just the other day, I took my daughter to the airport. Now, there have been many times over the years when I’ve threatened to stick her on a plane and send her somewhere on 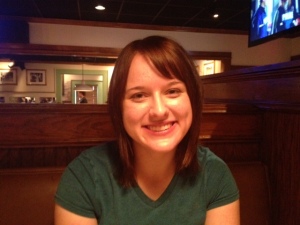 e way. But this time was different. This time she was taking her first flight by herself.

It was pretty much a full day for us. We live about two hours from the airport. So by the time you factor in the drive, getting through the airport, and my frequent bathroom stops along the way (I don’t know how my parents ever put up with me! Or how I ever complete a trip) we had to leave approximately 17 hours before her flight.

It was hard for me to believe that this little girl who, just last week it seems, was only two, was about to climb on a plane and fly somewhere. On her own. Without me. Of course, there was the metaphor of the young birds flying away and leaving the nest. But this seemed a little different, somehow.

My daughter got a pretty bad deal, losing her mother just before she became a teenager. I’m not the best father, but I try, and I’m an even lousier mother. But she’s survived it and me pretty well. As I saw her, beautiful and confident, heading to the plane on her own, I thought about some of the great times we have had together over the years – playing hide and seek at the Counting Tree, school projects and activities, road trips to rock concerts, and a slew of bad movies we’ve watched and laughed at together over the years.

We start out as parents young and sometimes, in my case at least, stupid. We have no real idea of what we’re doing as parents. Or what we’re getting into. And if we did, it would probably cut down on the number of kids born by about 99 percent.

But having said that, I don’t think there’s a day that’s gone by that one or both of my kids haven’t amazed me in some way.

I know things are changing in our family. My daughter is growing up, in fact has grown up. But I can hardly wait to see what the coming days and years bring. As Woody said in Toy Story, I wouldn’t miss it for the world.

Because while I may not be the best father in the world, my little girl is a great daughter.