My son has never hit a home run before. Oh, he’s taken some big swings. And he’s collected a few hits, but never a home run. 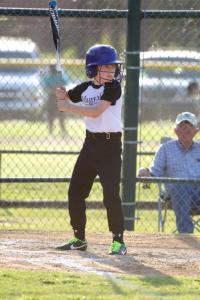 This is his fifth year to play. We survived two years of T-ball. (If you’ve never had the pleasure of taking in a T-ball game, count yourself blessed. In fact, a good way to cut down on crime would be to make those in prison watch about 12 hours of T-ball every day. Cruel and unusual? Yes. But I bet you’d see a drop in crime like never before.)

Then we made it through two years of machine-pitch baseball. This year we were moving up to the big leagues – the kid pitch league. It has been a learning experience for both of us.

First, you should understand that my son is not the best player on the team. But he has slowly gotten better every year. That’s been fun to watch. But like for many kids, moving up to face actual pitching hasn’t been easy.

And he has genetics working against him. I’m not the most athletic guy around. In fact, I was usually chosen last. And that was for sports I was good at. Fortunately, he’s more athletic that I am. But that’s not saying much.

As the season began, my son struggled. Struggled so much at times, that it was hard to watch. It didn’t help when in his first at bat in practice, he was hit by a pitch. And then, in one of the first games, he was hit again, this time in the head. He was fine; as for me, I may still be recovering.

But as he continued to struggle, especially with his hitting, he became frustrated. At one point, he even wanted to quit. Instead, we went to work. He wanted a new bat. All the other kids had one, so we got one, too. And we worked with that.

The hitting machine followed. We spent time letting him hit pitches thrown to him by the machine. Over and over. And we worked at home. I pitched to him over and over. (with wiffle balls. I can’t afford to replace windows on my house – much less my neighbor’s).

As we continued to practice, I could see his confidence growing. Slowly, but growing. And he began to hit the ball more – a couple of fouls, and a couple of hits. Not always. There were still strikeouts. But the frustration was slowly evaporating.

I think it’s sometimes harder on the parent. To watch your child go out and try to do something . . . and fail. Over and over. And over.

Then sometimes, there was a hit. And with it came the reward – his smiling face, full of pride in his accomplishment.

On Tuesday night, we had the last game of the season. I was hoping he could go out with a couple of hits. And yes, in my wildest dreams, even a home run.

Instead, it was a walk and a strike out. Not exactly the dream ending I hoped for.

When I sit in the stands, I probably get more nervous than he does. Sometimes, I wish I could just go out and hit for him (Actually, I probably wouldn’t do any better. Maybe not even as well). But in the end, whether it’s baseball, math, or cleaning a room, all we can do as parents is try to teach them. Show them. Work with them.

And finally, let them swing away.

← Escaping to a special place
Getting involved with the kids . . . in a drinking game →

2 comments for “Swinging away”