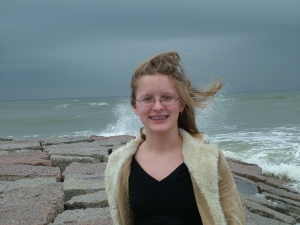 In times of great stress (or boredom – think long meetings), I have a place I escape to mentally. Actually, I have about five such places. Four of those are just rooms I like. Relaxing places. Calming places.

But one of my mental escapes is an event.

It was February 2006. My then 12-year-old daughter, H,  and I had decided to go see Coldplay in concert. And it was the first real fun thing we had planned to do since my wife had died almost a year and a half earlier.

We had both been Coldplay fans for several years. H  had never been to a concert, and I hadn’t been in years. In fact, it had been almost 15 years.

So we bought our tickets and headed to Houston for the weekend. We actually took off on a Thursday afternoon, so we’d have more time to spend on our trip. Of course, H didn’t mind missing school on Friday (but don’t call her school – I counted it as excused). On Friday morning, we made our way down to Galveston. It was a full day, and one I’ll never forget. We spent the day just hanging out, walking the beach, talking, eating out, taking in the sights of Moody Gardens and an IMAX movie, and just enjoying time away from the daily routine.

And it felt good – even though it was almost identical to the trip I had taken almost two years earlier. When my wife was sick, we had come to Houston’s MD Anderson Cancer Center. And we had spent a day in Galveston doing many of the same things On that day, we had talked how we needed to bring our daughter here, how much she would like it.

We spent part of our day Saturday at the mall, before I demonstrated my adept ability at getting lost in a big city. We drove around listening to a Coldplay song, “We Never Change,” and arguing and laughing over what the actual lyrics to one line were.

The concert was everything we hoped it would be. We enjoyed every song. And we both felt great after the show. They didn’t sing the song we had debated about earlier, but they did play most of our favorites. The next day, we drove home on a beautiful sunny February day, both still excited and talking about the show.

It was a great show, and, more importantly, it was a great bonding experience for us. Over the last few years, we’ve gone to several more concerts. All of them have been fun. But that first trip together is still my favorite. And it’s a trip I continue to take on a regular basis.

2 comments for “Escaping to a special place”