It had to come to an end, but I was far from ready for it to. It was the end of basketball as we know it. Or have known it.

It was the end of my son’s time for playing Upward Basketball. 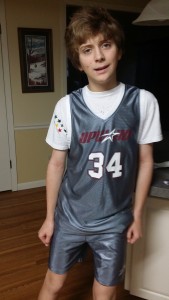 My son, just before his final game of Upward Basketball

If you’re not familiar with it, Upward Basketball is a Christ-centered basketball program played in communities around the country, and is operated through a local church in each area. The program is designed as an outreach ministry to children and their families. But it’s much more than that.

For us, it’s been a chance for my son to grow, to gain confidence – not just in basketball, but throughout his life.

The program is for kids in kindergarten through sixth grade. It’s hard to believe that my son just played his final game.

It seems like just last week that he was playing his first game, without really a clue as to what he was doing. I’m not sure he scored in his first two or three years in the program. But sometime around his fourth-grade year, he became aggressive on rebounding. He seemed to have a way of being around the ball after every shot.

But I’ve never thought he was a great player. In fact, this season I was a bit late in signing him up. After-the-deadline late. I begged to let him playing, saying that he didn’t need an evaluation; that he was average at best.

Only what I didn’t realize was that he had been playing some at school. And that as he’s grown, he’s not only gotten a lot taller (he’ll be passing me by any minute now), but he’s also gained confidence. And his motor skills have improved, as he demonstrated to me in our driveway time after time this year.

When the games started, I almost didn’t recognize him on the court. He was running the court, while DRIBBLING THE BALL!. I honestly didn’t know he could do that. He would drive to the basket, and confidently shoot – not always making it, but the confidence was there. 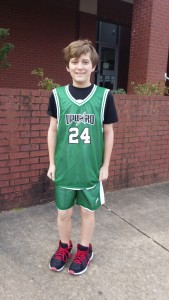 Preparing for a game in fifth grade.

I should have easily recognized him, since I was the assistant coach on our team. This was my third year to be an assistant. Most of my coaching ability consists of me yelling such insightful things as “Go!” or, even better, “Shoot!”

When I took the bench, I guess I still expected to see that little boy. The one that couldn’t dribble. The one who couldn’t shoot. The one who looked at times like he needed a compass to know which direction to run.

Instead, I saw a much bigger boy, a young man in fact, with his long hair flowing as he ran down the court. Taking long strides – not just down the court, but to growing up as well.

It would be an understatement to say I was proud of him. I was. It was great to see him doing well at a sport that I thought he was best suited for watching on the couch.

But not just for that. It was also great to see how much he’s grown over six years of Upward basketball – as a player and as a person.