I love my kids. And I’ll do almost anything for them. I dressed up as a clown for one of my daughter’s birthday parties. I’ve been to events, gone over spelling words, and even ridden rides at amusement parks. I’ve cleaned up puke and nursed them through all kinds of sicknesses and fake sicknesses. I’ve worked and sacrificed.

But there’s one thing that my son wants me to do that takes all my will power and self-resolve to actually go through with.

My son wants me to watch “America’s Funniest Videos.”

I cringe almost every time I hear the name. 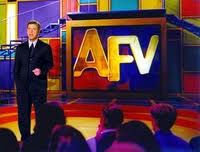 I think I should get paid extra as a parent for watching this show with my son.

I’m sure a guy getting hit in the crotch is funny the first time. Maybe even the 731st time. But that’s about my limit. Kids falling off trampolines? Skateboard accidents? Stuff falling out of the refrigerators and hitting people on the head? Or Feet? Chairs falling apart and people falling down. Dogs standing on their hind legs and cooking breakfast?

Yes. Yes. Yes. Yes. And yes. Well, maybe the last one is just wishful thinking. I keep trying to train my cat to make me breakfast. But will he do it? No. Ungrateful pet.

Yet, as much as I dislike the show, my son loves it! Absolutely LOVES it!

And that’s the only part of the show I like – watching my son watch it.

I’ve tried to steer him in some other directions. Since he likes physical humor so much, I thought he might like the Three Stooges. Ahhhhhh, nothing like the classics.

And he did like it. He laughed almost as much during it as he did during AFV. But for some reason, it never really caught on.

We’ve tried Alf and Gilligan and Leave it to Beaver. And he’s enjoyed them all. But he always comes back to his favorite.

I’ve even got him where he’ll laugh along with me while I watch my bad sci fi movies, but in this case, he may just be humoring me. (“I can’t believe my dad actually likes this stuff. How idiotic. Well, it is fun to watch him laugh and I do want a bigger allowance . . .”)

I’ve even had him watching old TV episodes of “Monty Python’s Flying Circus” with me. My daughter came in and immediately asks, “What are you doing to this poor child? I feel sorry for him.” Hmmmph! A lot she knows. He laughed. Well, at least once.

But as hard as I try, nothing has taken the place of the viewing pleasure of America’s Funniest Videos for my son.

My only concern is that I’ve seen him walking around with a video camera a lot lately. And he did install that trampoline in the back yard that he keeps trying to get me to try out . . .

1 comment for “I’ll Do Anything for my Kids, but Do I Have to do THIS?”