One of the hardest things for me to learn as a single dad has been cooking. Now I’m not going to say I didn’t know my way around the kitchen before my wife passed away, but on one occasion she did draw me a map to the kitchen, with explicit directions on how to find the stove.

In my early days of being a single parent, I thought there were three food groups: sandwiches, frozen food, and take out.

Then somewhere along the way I realized that at Wal-Mart, located between all the manly man items, they sell food supplies.

Ok, maybe it wasn’t quite that bad. But it was at least within the same area code.

So I started off with some simple dishes. I had one or two recipes from when I was a young, single guy back in the . . . well, back a ways.

Then I slowly expanded my menu. But what I found out is what many single parents before me already knew: it’s hard to come home after work and immediately cook a meal. Not only are you tired, but it takes time to do it. 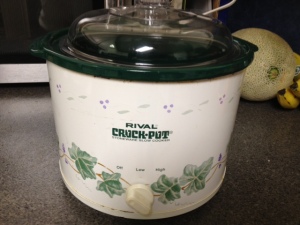 To borrow a line from my favorite episode of WKRP in Cincinnati, With God as my witness, I honestly didn’t know that crock pots came in more than one size.

Then I heard some of my female friends talking about cooking in a crock pot.

Aha!, I thought. A crock pot would be just the thing. All this time I thought you just used the contraption for making cheese dip. But apparently you could cook other things, too!

This was going to be great! I could put my meal on early in the morning, let it cook all day, and be ready to eat when I got home.

I suddenly felt almost like I knew what I was doing.

So what should I cook first? I mulled it over a bit, and decided on a pot roast.

So there I was, with my big roast on one hand and my small crock pot on the other. I tried valiantly to get the roast ready to cook and was thinking, just how in the heck are you supposed to get this roast into this thing!

Finally, somehow, I worked the roast into crock pot. Whew! Now I was ready to start doing some SERIOUS cooking.

There was only one small, itty bitty matter still in front of me. How in the HECK was I going to fit the veggies in this thing!

Needless to say, my first attempt at cooking the roast ended up veggie-less.

A short time later I discovered what would revolutionize my life as a single dad in the kitchen: the LARGER crock pot. It was like discovering the new world. Or even a new cool app for my phone.

I’m proud to say that I have since learned to cook several things in my crock pot. And some of the things my kids will even eat. So I think I might be on to something.