For me and my kids, it’s like waiting for Christmas. Well, it is for me anyway.

It’s like waiting for the last day of school. Or for the braces to come off. Or to finally take that summer vacation.

It’s the World Cup. And my kids and I have been waiting for it for four years.

If you’re asking yourself “what the heck is a world cup and why did I have to wait four years to buy one?” don’t feel bad. I didn’t know much about it either. Until the summer of 2006. 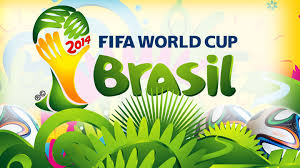 We’ve been waiting 4 years for the World Cup, that starts June 12 in Brazil.

I really don’t remember much about that summer. But one important thing happened to our family that summer. My daughter turned to ESPN. And started watching the World Cup.

In case you’re wondering, the World Cup is the soccer championship of the world.

Up until that point, I might have watched a total of about 17 minutes of soccer over the course of my life. But my daughter became immediately hooked. I probably gave her a hard time about it at first. I know I wondered why she – pretty much immune to all sports – had picked this event to suddenly start watching.

To me, soccer had always looked like a bunch of guys just running around and kicking a ball.

And I instantly fell in love with the passion of the sport – by the players, and especially the fans. It was nice to see an event that so many people in the world were so excited about.

And even though I didn’t know half of what was going on, it was fun. And it was especially fun to have the experience of watching and learning and getting excited about something new with my daughter.

Then we watched again in 2010. We watched at home and we watched some while we were at a family reunion. And my son was old enough that he wanted to be a part of something that dad and sister were so excited about. So we watched the event that was held in South Africa that year. We watched, despite the incessant annoying sound of the vuvuzelas – the noise maker that fans embraced that sounded like a swarm of drunk bees. 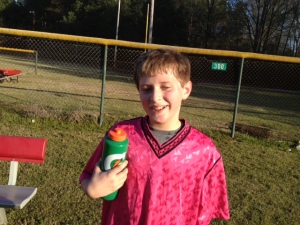 Will my son one day be playing goalie in the World Cup? Probably not. But in the meantime, we have a lot of fun watching the event together.

Not long after the 2010 event, we started counting down for the 2014 World Cup. It’s a topic that pops up in our conversations from time to time. For a while, we would ask each other how long until the World Cup? Then I got one of those Count Down apps for my phone, and we’ve been counting the days, and years, ever since.

And now it’s here! It starts tomorrow, and we’re already looking forward to watching more soccer than is probably legally allowed in the U.S.

It’s in Brazil. And we talked some about trying to go. But the tickets were slightly more than we could afford (which is around 20 bucks – and that was if we WALKED to Brazil).

Still, we talk some of going to the World Cup in 2018. I doubt we do though. That one is going to be in Russia. But unless we’re exiled from the United States or we win the lottery, I doubt we’ll be making that trip.

But in the meantime, we’ll enjoy the soccer. We’ll enjoy watching the excitement of the fans around the world. We’re anxious to see the fans of Brazil, especially when their beloved home team is playing.

But more than anything, I’m anxious to enjoy this event with my daughter and son. I know the World Cup isn’t quite the Super Bowl in the U.S., but it’s one of the biggest events we enjoy watching together as a family.

And that’s one of the best things about being a fan.

← He Has Questions. I Lack Answers.
An unexpected Father’s Day gift →