Every time I think I understand my kids, I’m quickly reminded of how little I actually know. Take this example from just last week.

My son and I were leaving town for a quick trip last Friday. I was going to pick him up about 30 minutes early from school. Then I thought, why not just check him out of school around noon. Then we could go to lunch together and have time just to play and goof around some. 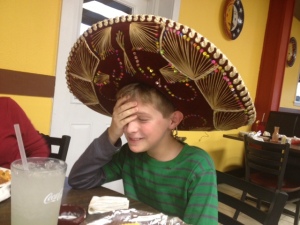 I might not can make him skip school, but I can embarrass him on his birthday. I mean, isn’t that what fathers are for?

So I asked him about it, expecting to hear something like “Yeah, Dad!”

Instead, I got this: “I don’t think that’s a good idea, Dad. I don’t know how to say this, but it’s important to me to receive my education.”

I’ve said it before, and I’ll say it again: who is this kid? I know he can’t be mine. If I’d had that opportunity, I would have volunteered to just miss the WHOLE day. I mean, why clutter up a great day of goofing off with something like classes and school.

To say the least, I was very disappointed in the direction that America’s youth is taking. Where did I go so wrong? I thought I was raising him the right way . . .

So, instead of goofing off and eating a bunch of junk food, my son went to school, and ate his vegetables. Well, maybe he didn’t eat his vegetables, but a dad can dream, can’t he?

← Thank you, readers, for a blogging good time
My son plays chess against . . . a tooth →