My son and I had an interesting conversation the other day. If you’ve read the blog before, you’ve probably come to realize that almost every conversation with my son is interesting.

It turns out my son’s class is studying medieval times, and he has really enjoyed it. He’s enjoyed it so much that he thinks he might like to have lived during those times. (Not me, though. I don’t want to live in any time period that didn’t have electricity, indoor plumbing, or high-speed internet). 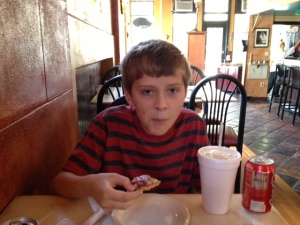 My son would love to be a food tester for the kind except for one teeny, tiny little problem.

And then he said the most bizarre thing of all.

“You know, Dad, I wouldn’t have minded being one of those people who tasted the food for the king to make sure it wasn’t poisoned.”

Really? I was a bit surprised. It’s not often you hear about kids willing to sacrifice themselves. But then came the condition.

“But I wouldn’t have wanted to because I would have had to eat a lot of food I might not have liked.”

And there you have it. My son – he’s willing to die, but doesn’t want to have to try a food that he might not like.

He doesn’t mind the thought of suffering through excruciating pain and writhing on the floor as his final breaths escape his body. Oh nooooooo.

But put a few lima beans in front of him. Or a salad. Or even crunchy peanut butter instead of smooth, and then there’s a life-threatening issue that we just might not want to face.

Well, at least I know he’s loyal. And he might even put his life on the line for me some time. Now, if I can just get him to eat some carrots.